FROM FRIENDS TO FAMILY.

We are called PadFAM for a reason. Here's a brief history of The Pad.

In answer to the limited local climbing opportunities, SLO-OP (a loosely formed co-operative bouldering gym) was established in a Self Storage unit in 2002 by founding members Paul Hatalsky, Julie Workman, and Yishai Horowitz (now all investors in the new entity). Horowitz conceived of the idea after a trip to New Zealand where he saw something similar.

Despite the odds against it: Small size – only 400 square feet and ten feet tall, the very overhanging, bouldering-specific homemade walls, financially broke even within its first month of operation.

Even with no advertising budget, SLO-Op continued to grow and attract new climbers. In the meantime, Horowitz enlisted Kristin McNamara to help him professionalize and run the operation, which she and he have run as partners ever since. We lost our lease in July 2005, due to new management.

In March 2006, Horowitz found a new location and galvanized the community into action, using volunteers to construct a steel-framed wall using money on loan from interested climbers.

The result? SLO-Op II. We filed as an LLC and a non-profit and became the country’s official first non-profit bouldering gym.

And then it got bigger and we got better.

We built a bigger facility again for SLO Op III in 2009.

(Horowitz and McNamara started dating at this point, too . . . all those long construction hours alone in the gym – carpal tunnel, nearly killing Horowitz with a nail gun . . . and led to marriage in 2011.)

The idea of The Pad has spawned a huge movement toward smaller co-op-type bouldering gyms all over the world and we couldn’t be more honored. 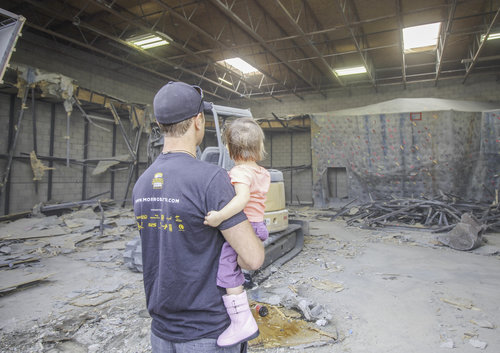 We opened a second location in Santa Maria in 2015 – and called it The Pad –  a 10,000 square foot facility with expanded kids’ program and social outreach.

And then, for good measure, we tore down SLO Op III, became a for-profit so we could take on bank loans and investors, and are now The Pad Climbing SLO, circa 2017, with 14,000 square feet of roped climbing, bouldering, weights, and in-house physical therapy, and yoga studios.

THANKS FOR JOINING US ON THIS JOURNEY.

Previous locations, in case you're wondering:

Santa Maria - The Pad: A St and Betteravia

Henderson: Same location, but it was called "Origin"

You can find out more about which cookies we are using or switch them off in settings.

This website uses cookies so that we can provide you with the best user experience possible. Cookie information is stored in your browser and performs functions such as recognising you when you return to our website and helping our team to understand which sections of the website you find most interesting and useful.

Strictly Necessary Cookie should be enabled at all times so that we can save your preferences for cookie settings.

If you disable this cookie, we will not be able to save your preferences. This means that every time you visit this website you will need to enable or disable cookies again.